One of the aspects of my practice that sets me apart from almost all other TMJ Specialists is that I personally make my patients' orthotics in my own lab, from scratch.  As described in the video above, I strongly believe that the intention with which a thing is made has an influence on the effectiveness of the thing.

I made the video above because I wanted people to have a glimpse into what is involved in making a custom stabilization orthotic for each patient. There are many steps, and I think of myself as a craftsman when I create these devices. I set the intention that the orthotic help you achieve your desired treatment outcomes, and I administer distance healing through your energy field as I create each device.  Some people may think I’m crazy, but we’ve noticed a measurable improvement in patient responses since I began implementing these alternative healing techniques.

On a technical level, we know that a biomechanical imbalance or instability will cause aberrations in muscle activity. When this is discovered, it can be very beneficial to wear an orthotic device, to temporarily correct the imbalanced relationships within the stomatognathic system. Depending on the severity and nature of the problem, an orthotic might be worn 24 hours a day for several weeks, or it may be prescribed to be worn only while sleeping. There are many different types of orthotics, and choosing the right one for you is a critical step in the diagnosis and treatment of your TMJ problem. I usually make orthotics which fit over the upper teeth, as this is more protective of the joint structures, which are my primary concern in most cases. 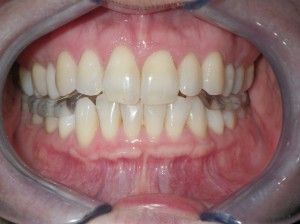 A daytime device can be fabricated in situations where you might find it necessary to wear something while you are awake, even after the initial 3-month treatment program. Daytime orthotics, such as the one shown on the left, are usually fabricated to fit over the lower teeth, in order to help the neuro-muscular system find “home base” throughout the day.  Notice in the photo above, that you can barely notice the orthotic in place.

I always stress that an orthotic is like a crutch. It is not intended to be a permanent solution to your problem. Its purpose is to provide something physical for your jaw to "lean on" as you try to figure out how you can support your body as it attempts to heal.  The goal of orthotic therapy is to allow the body to adapt, ideally to the point where you no longer need an orthotic. Sometimes, however, additional treatments are needed to help stabilize the system, before you can feel comfortable without an orthotic.  And sometimes people rely on the orthotic as a night-time device indefinitely, which is also just fine.

On a technical note, it is important to be clear that orthotics do not alleviate pain directly, because pain is not caused by biomechanical imbalances. Pain and biomechanical imbalances very often co-exist, and they seem to be interdependent, but the causal relationships are still unclear. My personal belief is that when known imbalances are corrected, even if the corrections are only part-time, the nervous system will perceive less danger, and in turn communicate less pain to you as a result.

The bottom line is that when our patients wear orthotics and proceed step-by-step through The TMJ Rehab Program, they report significant relief from symptoms such as headaches, jaw pain, locking and clicking in the vast majority of cases.

Learn More about Our Services